Non-Local: The Cachemasters of Pixel Fjords 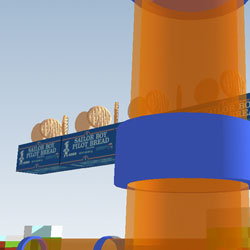 Non-Local is a digital storytelling project that blends the social notion of the ‘digital native’ with space opera and speculative fiction, but primarily focuses on Arctic regional ‘digital natives’, or ‘Cyberians’ and the way their oral traditions can function inside the Cyberian dreamtime logic of video gaming. The stories are written in a pan-arctic oral tradition, taking cues from the many cultures of the Arctic including Iñupiat, Athabascan, Sámi, Icelandic, Siberian, Scandinavian, Yu’pik and Greenlander. Collectively this videogame style of Arctic oral digital storytelling is referred to as ‘Cyberdough’, a portmanteau of ‘cyberpunk’ and ‘sourdough’.

Common motifs in Pan-Arctic stories include: raven, magpie, the little people, the giant people, the under-the-water places, bear mothers, aurorae, salmon and halibut fishing, sealing and whaling as well as more recently small plane aviation. For Non-Local it is convenient to think of these iterations of similar stories as levels, servers or worlds in an expansive MRPG, which is called the Cosmic Constant MRPG in the stories. The Cachemasters of Pixel Fjords is a sub-game within this larger collective MRPG.

Additionally, Pilot Bread is a regional foodstuff in Bush Alaska, and is equivalent to hardtack.

Nathan Shafer is a global artist, writer and educator from Anchorage, Alaska. In 2008 he recieved his MFA in digital media from Rutgers University in New Jersey. For the past ten years he has been working with new media, constructing a wide range of socially interactive and technology-based projects, from low-temperature superconductors and cryonic suspension devices to his recent work integrating augmented reality platforms with phenomena. In 2000 he helped form the Meme-Rider Media Team, and in 2010 he initiated the Sub-Arctic Reenactment League of Living Yore (SRSLY) in Anchorage, AK.