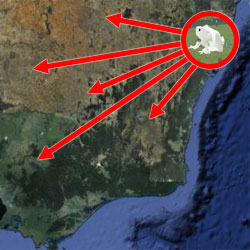 Researchers WD Pappenheimer and JC Freeman, at the artistic medical laboratory, Virta-Flaneurazine, have bred a hardy specimen of Bufo Virtanus which flourishes particularly well across the mixed realms of real and virtual worlds. The prototype is the bufo toad, the species known in Australia as the Cane Toad. A subspecies of Bufo Virtanus was first produced for an augmented reality exhibition at the Museum of Modern Art in New York City.

More recently, another subspecies was developed in the Royal Botanic Gardens of Sydney. (For details on its specific morphology and behaviours, refer to the following article.) Since its appearance there, it has established a separate colony in the suburb of Surry Hills and all evidence points to further expansion elsewhere in the city, and beyond into Southern New South Wales and Victoria.

Based on what we already know about Bufo Virtanus’ speed of movement and migratory patterns, we anticipate the appearance of colonies in the following localities over the course of the next month – Gymea, April 22nd; Wollongong, April 23rd; Canberra, April 24th; Goulburn, April 25th; Albury, April 26th; Shepparton, April 27th; and Bendigo, April 28th.

We will naturally be tracking Bufo’s progress throughout this period and will provide details of the precise expected locations of its colonies closer to their actual dates of appearance.

To assist us in the task of tracking these infestations, we encourage members of the public to download the Layar Reality Browser mobile toad-tracking application. This application will not only track the toads as they pass from the virtual into the real, it will allow amateur toad-spotters to capture images of the Bufo. These should then emailed to filmcement[at]gmail.com so they can be added to our soon-to-be-established online gallery and be used to better target our containment strategies at those locations.

Gymea – Go to the grassed area between the outdoor cafe seating and the artificial creek in the grounds of the Hazelhurst Gallery and Regional Arts Centre.

Wollongong – Go to the Duck Pond near the Uni Bar at the University of Wollongong.

Goulburn – Go to the Church St entrance to the Goulburn Regional Art Gallery.

Canberra – Go to the tree in the middle of the eastern courtyard of the Gorman House Arts Centre.

Albury – Go to the park next to the Albury Art Gallery.

Shepparton – Head for the herd of art cows in Monash Park. (NB: This is a highly mobile colony. It’s location may change in the near future.)

Bendigo – Go to the artificial grass covered rotunda outside the Bendigo Art Gallery.

How to observe and interact with a Bufo colony

1. Download the latest version of the Layar Reality Browser

If you already have Layar installed on your phone, make sure you upgrade it to the latest version (5.0). If you have a version earlier than 4.0, you won’t be able to see the toads. You can still potentially see them with Layar 4.0, but for the best viewing experience, get 5.0.

2. Take your phone (and headphones) to your local Bufo colony

Head to the location of the Bufo colony in your city. (See the list at the bottom of this page.) Make sure you bring a pair of headphones as well, so you can hear the Bufo as well as see it.

3. Find a spot with good reception

Three bars or above on 3G is what you want. When you have this, open the Layar app and search for bufos. A listing called Bufo’s Progress should appear. Tap on it then press the Launch button to begin.

At first you, will see a number of grey “eggs”. Depending on reception, it may take a short while for these to hatch. Be patient though and they should appear. (If they don’t, it means that the environment was simply unable to support this species. In such instances, echoes of their calls can still be heard issuing from their lifeless eggs.)

NB: In addition to the toads, you may also see some apparently non-toad-specific visuals. Do not be alarmed; these are, in fact, produced by the toads.

“Touching” one of the toads on screen will open up a box with a button labelled Listen. Press on this to hear the toads’ call.

Next to the Close button at the bottom of the screen, you will find an icon with an arrow. Press on this and you will be able to Take a screenshot. Use this to capture photos of the toads and send them to us.