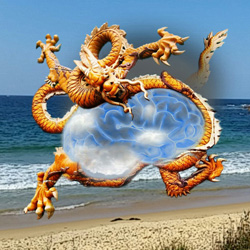 Dragon, the imaginary almighty creature, is the symbol of power in Chinese culture. Inspiring personal and national ambitions in both ancient and contemporary China, this cultural icon is vividly alive throughout Chinese history. In this context, the AR installation visualizes how this thousand-year-old unreal creature has affected Chinese people’s mindset and thinking.