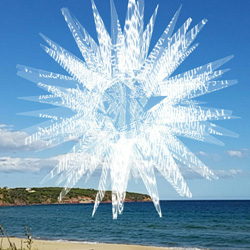 This work is a memorial to the 1900+ killed six months during Operation Protective Edge in Gaza. The work is based on a map of approximate GPS locations of these casualties (derived from news reports) which has been transposed full-scale into the sky above the Bega Valley region. At its northern end, “Beit Hanoun” and “Beit Lahiya” are above Bermagui, and at its southern end, “Rafah” is positioned over Bega. (There is also another instance of this map that covers the sky over Merimbula and Eden.)

In the location of each of the fallen on the map will be a star, and their name, age and brief details about their fate which will be visible in the information window when the “star” is in the center of the screen.

Warren Armstrong is a new media artist and the organiser of (Un)seen Sculptures. Prior to immersing himself in augmented reality, he worked with composer Amanda Cole on a series of installations that turned Twitter updates into generative musical compositions.

He sincerely hopes that people who come to (Un)seen Sculptures are moved, excited and/or delighted by the amazing work of the artists involved, and maybe will walk away inspired to create their own augmented reality art.