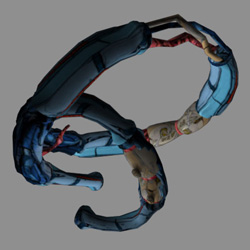 The cable is a reference to the Nawlz comic. The story is set in the futuristic City of Nawlz where society regularly engages in augmented realities. The protagonist, Harley Chambers follows a virtual cable through the street of Nawlz to discover more hidden artwork. As Harley becomes immersed in the augmented realities of Nawlz, the boundaries between the virtual and physical begin to dissolve. The cable represents the lure into this new format of virtual entanglement.

Stuart Campbell is an international award winning illustrator and interactive designer and creator of the online interactive cyberpunk comic, Nawlz. Beyond Nawlz, Stu has created educational multimedia installations for the Australian National Museum, pilot training programs for the Australian Defence Force, directed online creative projects for Honda and Coke and is regularly commissioned to create illustrations for popular youth cultures including skateboarding and snowboarding.

The ‘Nawlz Cable’ artwork was created in collaboration with Dom Francis