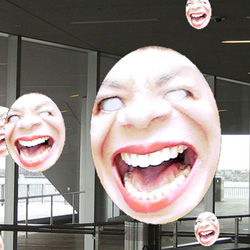 Varying from skepticism to outrage, a matrix of faces hovers in the air.

“ARt Critic Face Matrix Reloaded” premiered on April 22, 2011, at the Institute of Contemporary Art in Boston as part of the Boston Cyberarts Festival. It is an animated version of the original “Art Critic Face Matrix” that was part of the pathbreaking “We AR in MoMA” guerilla AR intervention in MoMA New York in 2010, where it is now on permanent exhibit.