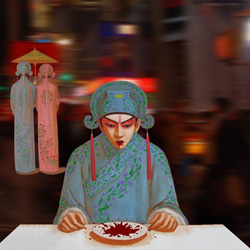 Derived from a popular Chinese folktale Butterfly Lovers (梁山伯与祝英台) regarded as the equivalent of Romeo and Juliet, the painted figures in traditional costumes are placed in a contemporary urban setting. The augmented reality installation addresses issues of Chinese diaspora and cultural identity, and visualizes the restless, roaming cultural spirit of the East hidden in western metropolis.

Integrating painting and mobile phone augmented reality application, artists weave storytelling of Chinese folklore into a contemporary, global circumstance. Butterfly Lovers superimposes two layers of reality that are contradictory yet interpenetrating: while the augmentation Butterfly Lovers symbolizes perpetual repression of humanity and resistance in Chinese culture, the actual night scene of a western urban district becomes an emblem of consumerism. As Chinese immigrant artists, we have witnessed many tragic stories of the diaspora. Although being surrounded by urban crowds and dazzling material world, immigrants often live in isolation and struggle to survive. Our own life experience and the fate of our friends urge us to expose the situation through artworks. What is the real relationship between cultural spirit and material reality? This is the question raised by Butterfly Lovers.