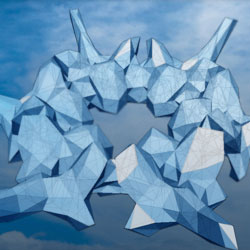 This piece started as a vertebrae of a Duiker, (antelope native to Sub-Saharan Africa). The piece has been through several iterations hence the v0.* naming convention, as its an ever evolving three dimensional shape from “home” which I have become attached to (or obsessed with?). Its an evolution of the pure sculptural forms found in the vertebrae to which I often return to, so its cyclical – so the form became a mandala, rather than attempt to replicate the original it now exists in its own in the medium of AR.

Jake Hempson is a multi-disciplinary artist and animator currently completing a Masters by Research at QUT’s Faculty of Science and Technology. His practice-led research incorporates and translates ‘found art’ into the medium of digital sculpture. He uses photogrammetry techniques to capture 3d material, which he then reinterprets, digitally recombining the forms using voxel and polygonal based sculpting tools.