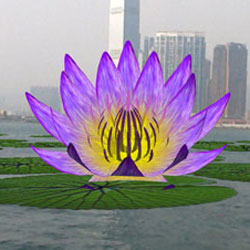 As global water levels and temperatures rise, plants and animals are mutating to adapt. Strange new creatures are arising at the interstices between plant and animal, questioning and transgressing the boundaries of what is considered to be reactive flora or active fauna.

In 2013, one such form was observed to follow the route of the Star Ferries between Hong Kong and Kowloon. It is hypothesized that it feeds off energy, not only that dissipated by the ferry boats, but also that of the human cargo and their electronic devices. Apparently sensitive to the mediated human gaze, a seemingly small, innocuous water lily can enlarge to engulf viewers who focus it in the display of their mobile app. Until now viewers have reported feeling no effects other than a temporary fibrillation. Scientists worry however that future mutations could cross boundaries between insentient plant and sentient, perhaps even carnivorous life forms.