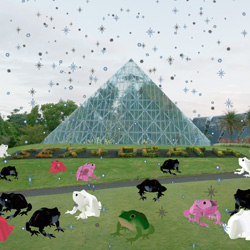 Researchers WD Pappenheimer and JC Freeman, at the artistic medical laboratory, Virta-Flaneurazine, have bred a hardy specimen of Bufo Virtanus which flourishes particularly well across the mixed realms of real and virtual worlds. The prototype is the bufo toad, the species known in Australia as the Cane Toad, which was introduced to Queensland in 1935 to combat the Cane Beetle. Unfortunately this bio-attack never solved the beetle problem and the giant species of cane toads instead became an uncontrollable infestation. A subspecies of Bufo Virtanus was first produced for an augmented reality exhibition at the Museum of Modern Art in New York City. Like its physical ancestor, this version of the virtual toad also produces a bio engineered drug from its skin which can generate various visual and wandering experiences for those who come in contact with the toads. However, in this case these side effects are primarily cascading images and information emanating from the World Wide Web.

This particular subspecies, developed in the area of the Royal Botanic Gardens Glass Pyramid, has been named the Sex and Death Bufo Colony, because it has developed visual traits of the Sex and Death orchid exhibition created there in 2005. In addition to sex and death, there were three themes identified during that exhibition; “Seduction”, “Cooperation” and “Deception.” Visitors to a colony of these toads will notice that they change different textural colors; pink, red, white and black. These are the colorations of some of the orchids in the preceding exhibition. They seduce with pink, cooperate or copulate with red and white, and finally deceive and die with a display of black.

Since their introduction at the Botanic Gardens site, they have not only flourished there, but have proven to be highly mobile and eager to explore other local habitats. This has resulted in a number of members of the original colony migrating to the suburb of Surry Hills to establish a separate, but equally robust colony. To the best of our knowledge, there are no other viable infestation sites in the city at present, but this could easily change. Bufo Virtanus is, after all, an extremely adaptable organism with no known predators; either in the real or virtual world.