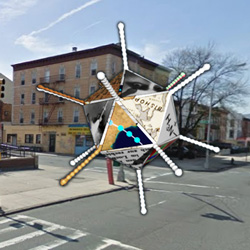 As a result of the constant stream of abbreviated information it fires at us, some are claiming that the Internet is destroying our ability to process long-form data like novels and opera. If so, it deserves to be classified as a disease, but one, like latent toxoplasmosis, which may actually have positive side effects in certain cases (eg increased immediate connection with the knowledge and worlds of others). But if it is a disease, what is its vector of transmission? Is there an organism responsible; incubated perhaps in the faeces of LOLcats? Allow me to suggest one possible candidate – the Information Virus (Notitiaviridae internets). Allow me also to manifest it in the “real world” so people may finally see and know it…

The Information Virus is an augmented reality work based around a re-purposed commercial 3D model of an adenovirus. Sequences of public domain images randomly sourced from Wikimedia Commons flash across its surfaces, giving it “life”. Onlookers who are intrepid enough to approach and interact with it are rewarded with a brief random public domain audio dispatch from the past sourced from LibriVox, Musopen or the Internet Archive. (To hear the dispatch, the onlooker needs to tap on the virus’s label then press the “Listen” button.)

The audio recording could be anything from Erik Satie to the theme song from “Duck and Cover”; Shakespeare to The Sermon on The Mount; Jaywalking to The Moon Landing; Watkin Tench’s recollections of first contact with the Gadigal to a young lady travel writer’s guide to 1850′s Sydney. The Virus will decide what it wants you to hear…

(NB: All necessary precautions were taken when manifesting the Information Virus. Risks of new forms of infection resulting from close virtual contact should thus be considered minimal.)

Warren Armstrong is a new media artist and the organiser of (Un)seen Sculptures. Prior to immersing himself in augmented reality, he worked with composer Amanda Cole on a series of installations that turned Twitter updates into generative musical compositions.

He sincerely hopes that people who come to (Un)seen Sculptures are moved, excited and/or delighted by the amazing work of the artists involved, and maybe will walk away inspired to create their own augmented reality art.