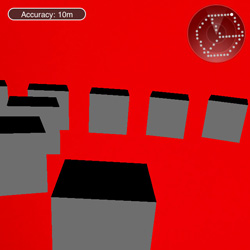 Augmented Reality (AR) has finally gotten a foothold in our daily reality. With a massive availability of AR apps on the mass medium of today, every smartphone user is getting familiar with the art of the added reality, things that are not physically visible. That fact triggered artist Sander Veenhof to explore ways to develop augmented reality that cannot even be seen with an AR app. His augmented reality creations manifest themselves in another dimension: the 2D environment of the Layar browser compass function. But even there one sees an object escaping its dimension.

For artists, augmented reality has unprecedentedly extended the horizon of the creative sphere in multiple ways. Not only did it open up a new hybrid dimension to explore, with infinite possibilities in terms of size, complexity or spatial reach, the extension of possibilities goes beyond the crossing of former real world limitations, organisational borders or physical walls. After exploring the concept of infiltrating musea worldwide using augmented reality, Sander Veenhof (NL, 1973) now focusses on the creation of AR artworks that take into account, deal with, reflect or even disturb the unique characteristics of the medium. His artistic approach is based on a technical intuition, which he started developing ever since programming visual effects on a Commodore 64, studying computer science at the VU university from 1991 till 1997 and finally graduating at the ‘instable media’ department of the Rietveld Art Academy in Amsterdam in 2009.